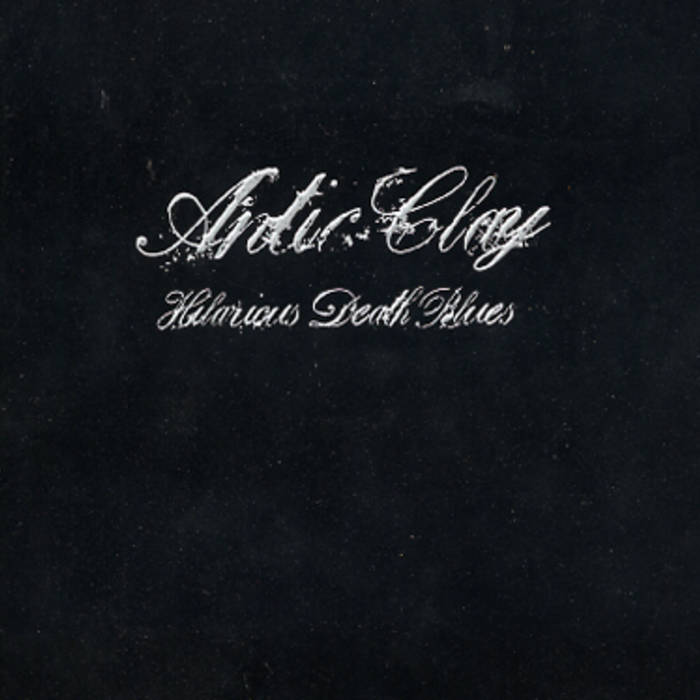 "Hilarious Death Blues is a dark, smoldering journey into isolated Americana. It's country music that's silently aware of the impending apocalypse, and doesn't pine over lost love and and the daily grind of an oppressive job. It's a low and lonesome sound that holds a mirror to existential angst and rages against entropy, ennui, murk and miasma with flourishing, poetic beauty." --Chad Radford

"Let yourself get taken in by the dark times emerging from this virile and exiled dumper, vessel of all the ancient echoes. The funerary heart for decadent Mormon. Antic Clay is not only about a more electrification prone to tension even if the man does cast his painful strength and his discreet vision and his wild poet constitution in the events. With Antic Clay, it is not only about rooting oneself in a rotten compost, reluctant to sustain a tree with hardly any ancestry. From the brave and brotherly clap hands' running, and to this can be added the tangle of a harmonica, which blades have been replaced by scraps of biting winds, combined with guitar-textures, knocking, eager for glissando dirt, so far and so close, breath of whiskey in the inside. The whitened bones of the horse's carcass as primal harp, under the best of circumstances accompanying the bruised dusty yet glamorous murmurs of the death-a-billy cantor from an old incandescent Myssouri. Reverend Antic Clay is this curse of rebellious god, resisting song-writing, constantly swaying between hope and destruction, between, tabula rasa, erasing it all and the stoic and profound renunciation." --Manuel Aubert a.k.a. BlackBird Merle Leonce Bone, Tours, France, Friday, June 8th. 2007. (Translation: Paula Antunes)

Michael Bradley adopted the name Antic Clay and traveled to a friend's studio in the mountains of Asheville, North Carolina. From these sessions comes the audacious double-cd debut "Hilarious Death Blues", a title inspired, like the pseudonym Antic Clay, by the dark westerns of reknowned American novelist Cormac McCarthy. Bradley/Clay sang, wrote and played most everything on the album, which has a feeling about it both archaic and modern, heavy on the reverb and sparse on the instrumentation like old Sun Studios recordings, very much inspired by late night lost highway AM radio, vintage country songs and the mythology of the Old West, although the lyrical content is far too dark and cynical to make it on the Grand Ole Opry. HDB puts you in an old dark wooden room with only a burlap curtain against the night wind, and a guttering tallow candle's incandescent dance across your old bottle of bourbon. It is best listened to loud. And alone.

There are bluesy dirges, somber western ballads, dissonant foot-stompers, tavern songs and even an unlikely sea shanty. The lone cover, "Decades" by Joy Division, is barely recognizable as the 'post-punk' classic. It is stripped to the root with guitar, harmonica, voice and violin, and made all the more powerful for it.

HILARIOUS DEATH BLUES is 3+ years in the making, and is more of a document of a period of time in a writer's life than a statement of intent. Indeed, Bradley's new side-project of vintage country covers "SINNERS AND SONGRIDERS" may reveal much about the future path for Antic Clay, strongly hinted at in the lonesome country swagger of the song "Non-Prophet Blues" (from album B, "The Horseless Rider).